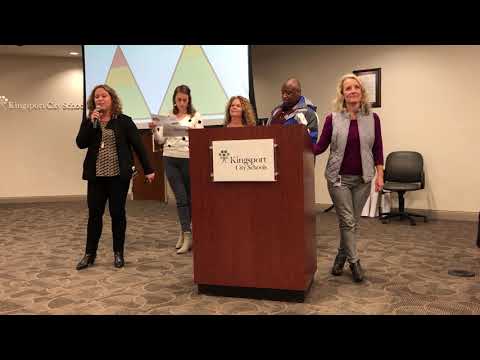 KINGSPORT — Under the premise that a school system’s story can’t be accurately told using only test scores, Kingsport City Schools has launched its first data dashboard including other data and is urging other area systems from Mountain City to Morristown to do the same.

With the Tennessee Department of Education tentatively set for Nov. 25 to release its annual Report Card, which is to include first-time letter grades for school systems but not individual schools, Superintendent Jeff Moorhouse on Tuesday night passed out the system’s 2019 Strategic Plan Data Dashboard to the Board of Education. Moorhouse said it is a jumping-off point that will be refined in the future through “constant evolution.”

“We’re more than just test scores,” Moorhouse said. The “one pager,” an 11-by-17-inch “centerfold” for the school system’s annual report and calendar, paints a positive picture of KCS. However, he said the system will not shy away from showing results in future years that are not necessarily rosy.

“It’s an effort to tell the story of Kingsport City Schools,” Moorhouse said of the seven-section dashboard that the school board discussed at its retreat earlier this year. He said he’s already urged other area school system superintendents and directors to promote their systems through similar documents.

WHAT DOES IT SAY?

1.The Academic Report Card, including rankings of third-grade reading proficiency that at 59.5 percent is just shy of the 60 percent goal, a 47 percent math proficiency in sixth grade and the percent meeting eighth-grade benchmarks at 77 percent English, 51 percent reading, 55 percent science and 62 percent math. And it reports the number of Diploma Plus students who take at least one post-secondary opportunity was 395 of 520 graduates, or 76 percent.

2. Portrait of a Graduate is a vision that focuses students on perseverance based on non-chronic absenteeism; empathy based on service projects and bullying reports; adaptability based on student goal setting and groups and extracurricular activities; critical thinking based on project-based learning and integrity based on in-school and out-of-school suspensions and mentor/mentee experiences.

4. Finance and Enrollment showing per-pupil expenditures of $11,106, above the state average of $10,560; 38.6 percent economically disadvantaged out of a K-12 enrollment of 7,426; demographics including 81 percent white and 11 percent African American; 75.8 percent of the budget dedicated to instruction; and 53.3 percent of revenues from local sources, 38.4 percent from the state and 8.3 percent federal.

5. College and Career Readiness showing ACT composites of 21.9 compared to a state average of 20.0, with students meeting all four subject area benchmarks higher than the state average; Advanced Placement scores of 3 or higher at 6.7 percent; a graduation rate of 94.06 percent; 106 students in 384 courses for 1,177 dual enrollment credits; 67.6 percent, or 71 of 105 military aptitude test takers, scoring high enough to get into the military; 62 students who got gold or platinum levels in ACT WorkKeys; and 436 students receiving at least one of 24 industry certifications offered.

6. Athletics and the Arts include D-B’s Chorus and Orchestra performing at Carnegie Hall and winning awards, the second-winningest football program in Tennessee, a Class AAA National Champion marching band and the winningest high school baseball and basketball programs in the United States.

7. A Day in KCS includes 348 visits to school nurses, 2016 breakfasts and 4,149 lunches services, 2,921 bus miles driven and 1,521 students delivered and 110 individual student visits to school counselors, not including classroom sessions.

WHAT MAY BE ADDED IN THE FUTURE?

School board members praised the document but were quick to suggest additions for next year, as was Moorhouse, He said a section on STEM (science, technology, engineering and math) may be added, as well as the number of technology devices deployed in the system. School board member Todd Golden suggested adding awards and accolades such as magazine rankings of Dobyns-Bennett, which Moorhouse said was the kind of information that may be linked online through QR codes. President Carrie Upshaw suggested QR information on how the system increased the number of students taking Advanced Placement courses.

Member Jim Welch said that the information should be used in recruiting teachers as well as potential residents to Kingsport.