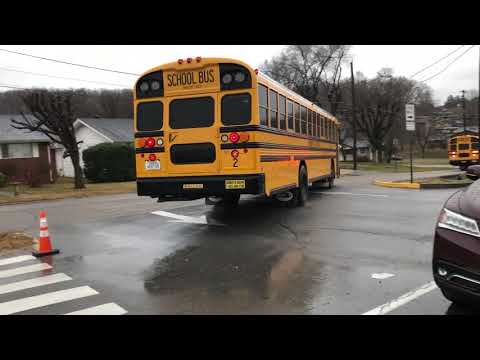 KINGSPORT — If you’ve ever thought about being a school bus driver, Kingsport City Schools officials are beyond anxious to get you behind the wheel.

The only problem is they needed six of you yesterday.

Kingsport City Schools Chief Student Services Officer Jim Nash and Chief Human Resources Officer Jennifer Guthrie recently told the Board of Education that the system has six vacant driver positions. Because of the vacancies, some routes have been doubled up and students are having to wait later for buses, especially for rides home.

Because of the shortage, Transportation Supervisor Tommy Starnes is on the road driving a bus each day. He and the other drivers combined drive about 2,485 miles a day spread over 158 daily runs transporting almost 2,000 of the district’s more than 7,700 students, according to the school system.

If the six driver vacancies are filled, Nash said the system could added three needed routes to serve Adams Elementary and the Lynn Garden area and make some remaining routes shorter.

He said the shortage directly affects Dobyns-Bennett High School students who ride the bus and are on the singleton schedule instead of the block schedule — a group of students that includes all band students. They get out a bit later and have to wait for buses to return from earlier runs. School board member Julie Byers said it is a tough situation for freshman band members especially.

For more information, call Starnes at (423) 392-4670, email [email protected] or go to the school system’s transportation website section at k12k.com.

Guthrie said the problem is not unique to Kingsport and is part of a national trend possibly linked to a more robust economy.

Nash said some local school systems simply merge routes when they can’t find enough drivers, something that has happened in neighboring Hawkins County. Sullivan County Schools contracts most of its bus routes except special education ones, but Sullivan Director of Schools David Cox said there never seem to be enough bus drivers here or in other districts he served in Maryland and Virginia.

Kingsport’s school system offers starting drivers $12.22 an hour with 2% raises each year on a 20-step scale, which Guthrie said means many drivers are making $16 to $18 an hour. Regardless of how long routes actually take to run, regular education bus drivers are paid for six hours a day and special education drivers for seven hours a day, with drivers also able to pick up extra money by driving for field trips, athletic events and other off-site school activities.

“We treat these as full-time positions,” Guthrie said, which means they are offered health insurance, retirement and other benefits.”

WHAT ELSE IS BEING DONE TO HELP?

Nash said three things are being done to help: piloting bus attendants so the driver isn’t the only adult or non-student on the bus; recruiting new drivers, often by using existing ones as ambassadors; and the school system supporting drivers and would-be drivers.

BOE President Carrie Upshaw said the bus attendant program should be a big help, providing another adult to handle issues that may arise on a busload of students.

“We provide all the training,” Nash said, adding that the system accepts former truck drivers and others but actually prefers to have someone who has no prior commercial driver’s license training or experience. The reason is the safety practices for hauling people differ slightly from those for hauling things. Nash said the system also is flexible in allowing drivers to work only certain days a week or would even consider allowing two people to share one route in morning and evening shifts.

“You’re going to have to pay more than Target,” board member and retired teacher Jim Welch said of the retailer he said starts employees out at more than $13 an hour. He said the situation leaves people choosing between a job that pays less and requires you to drive a commercial vehicle with sometimes 50 or more students through city traffic versus a job that pays more to work inside a climate-controlled store answering questions, checking out customers or stocking shelves.

Guthrie said other school districts have increased bus driver pay but haven’t seen increased numbers of applicants or drivers because of it. However, she said the school system is evaluating pay, although she said paying enough extra to get the positions filled might be more than the system would or could afford to pay.

“So many of our drivers have personal connections with students,” Guthrie said, adding that drivers know students and where they live. Byers said her children have had the same driver from kindergarten up.