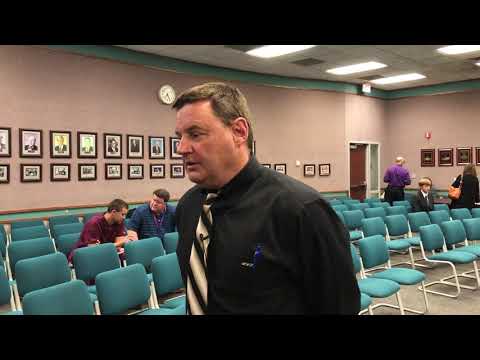 BLOUNTVILLE — A potential school system shutdown in Sullivan County next month appears to have been averted, and 2 percent raises for most school system employees may be paid, including retroactive pay, on November checks.

The school board voted 7-0 at its regular meeting Thursday night to approve a compromise the Sullivan County Commission approved in a called meeting on Wednesday night. The action, which requires the school system to submit the amended budget document to Tennessee, has the blessings of the Comptroller of the Treasury and the Department of Education.

“I’m happy to have it resolved,” Board of Education Chairman Michael Hughes said after the Thursday night meeting. He said the school system will get an electronic version of the budget through the County Clerk’s Office to the Department of Education before the Oct. 8 deadline for getting a $4 million check from the state on Oct. 15.

The 2 percent raises, which Hughes said were for all 1,300 or so employees except JROTC instructors, were approved by the school board in July. However, to begin showing up in paychecks, the raises must have County Commission approval, which the school board vote asks the commission to expedite at its Oct. 17 meeting by approving moving $1.55 million from one line item to another. Non-school county employees also got 2 percent raises this fiscal year. The board approved the general operating budget of $83.2 million in April.

“We’ve been waiting until this (maintenance of effort issue) was resolved,” Hughes said. “You can’t give raises with non-recurring money.”

School officials said at a Board of Education work session on Sept. 26 that the withholding of the more than $4 million monthly Basic Education Program payments starting Oct. 15 would lead to the closure of the system in about four weeks, which would have worked out to Nov. 12.

At issue was $800,000 the Sullivan County Commission cut from the school budget’s $1.3 million earmarked last school year for non-school use of school facilities, which became part of maintenance of effort in 2017 when the commission cut about $2 million from Kingsport City Schools and $1 million from Bristol’s schools but added $800,000 to the county schools’ recreation fund.

State MOE law, designed to keep local governments from supplanting local expenditures with federal or state funding, requires the commission to fund the school system at the same per-pupil level as last year based on weighted average daily attendance numbers.

After the meeting, Hughes said he is confident the system will see a loss somewhere more than 1 percent but less than 2 percent, based on attendance numbers to date. The “city-county split” is based on ADA measures taken throughout the school year in Sullivan, Kingsport, Bristol and Johnson City schools. “We think it is fair. We will get what our losses reflect,” Hughes told reporters.

Commissioners had argued the school system last year got $1.6 million more in local tax dollars. Each 1 percent drop in ADA is projected to cost the system about $875,000. So if the weighted average, which takes into account ADA changes from the four school systems’ portions of Sullivan County, ends up more than 1 percent down and local shared revenues to the county schools based on ADA are not up, the county system will get all or part of the $800,000.

The 24-member commission approved the measure, amended for the second contingency at the suggestion of the Comptroller’s Office and Department of Education, 19-0 with three absent and two abstaining. Deputy Comptroller and former state Rep. Jason Mumpower of Bristol was among those who appeared on a giant projection screen to speak to the commission.

Before the vote, Hughes said that of $18 million of money on hand, about $8 million is restricted, including money in the self-supporting school nutrition fund. Of the other $10 million, he said the state requires 3 percent not be spent and kept on hand.