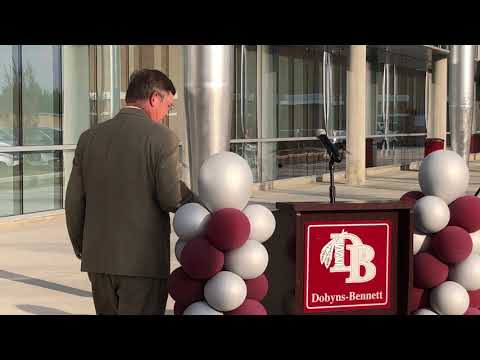 KINGSPORT — If you don’t like spiders, you might want to stay away from Evie LaFollette’s second-floor biology classroom in the new Regional Science and Technology Center.

But if you like to see robots in action, you might want to visit first-floor areas of this new Dobyns-Bennett High School building, where members of the Cyber Tribe 4020 robotics team engineer, build and try out robots in career technical education (CTE) and science, technology, engineering and math (STEM) teacher Angela Conrad’s areas.

Tuesday evening, about 250 people got a look at these and other classrooms and labs inside the facility during an open house, held after a ribbon cutting for the addition, which is the new front entrance to D-B.

Principal Chris Hampton said the curriculum inside the building would occur whether the new addition was here or not, but he said the building facilitates such learning and teaching. Superintendent Jeff Moorhouse, speaking to a crowd that included immediate past Superintendent Lyle Ailshie, said the project proved the “power of partnerships” that can occur “when enough people cared.”

The more than $20 million project was funded by the city’s share of $140 million in Sullivan County school capital bonds, approved in late 2016 and sold in 2017.

The 70,000-square-foot, 400-seat building fulfills the mission to create a culture that inspires innovation through science and technology, according to the school system. Hampton said the five academic goals for the center have been established as: 1.) support scientific inquiry and discovery; 2.) foster creativity and problem solving; 3.) offer meaningful career opportunities; 4.) provide application-based experiences through an integrated curriculum; and 5.) utilize the power and flexibility of technology.

International architecture firm Perkins+Will provided design concepts and BurWil Construction Inc. of Bristol began construction during winter break 2017. A groundbreaking event was held Dec 7, 2017. Because of wet weather delays, some work continued after the Aug. 5 opening of the 2019-20 school year. Hampton said most of what remains to be done is landscaping and paint touch ups.

LaFollette, who teaches special education biology and two honors biology classes, said her classroom has been all about spiders lately. Her biology students Tuesday helped with an East Tennessee State University study of the circadian rhythms of spiders. She said the research hopes to find why spiders seem mostly immune to their surroundings and things like temperature changes when it comes to a sleep schedule.

So students loaded 36 spiders into tubes and are measuring their activity and changes in circadian rhythms.

“Today we had an ETSU professor here, and we’re doing spider research,” LaFollette said. She said students from D-B, University School at ETSU and Volunteer and Cherokee high schools are participating in the spider study. However, she said the other participants were in Advanced Placement classes, with D-B having the only non-AP students participating.

FROM ROBOTS TO CODING AND BIONANOTECHNOLOGY?

Conrad, a teacher who helps the Cyber Tribe, was in the lab where robots are built after they are engineered in a classroom across the hall. Out in the commons area, first-floor area, robot team members Ethan Maness, Marcus Espeland and Devin Herzog explained some of the robots’ functions to parent Lynn Tulley, who works for the Tennessee Department of Economic and Community Development.

Tulley said such programs are part of the economic engine of the Tri-Cities because they help train the future work force and attract some of the best and brightest technology-oriented folks to move to the area for excellence in technology education, sentiments City Manager Chris McCartt expressed during the ribbon cutting.

Nathan Bailey in his coding and computer science classroom was letting folks try out a coding project, a machine learning model in which a machine is programmed to track movements of a person’s wrists so that person can use them like an artist would use paint brushes.

In earlier remarks at the ribbon cutting, Hampton said that newer programs in the center included ocean studies, synthetic biology curriculum in all biology classes and engineering design. Potential future additions include artificial intelligence, organic chemestry and bionanotechnology. (The later is about the control of matter on the atomic and molecular scale.)

He said the genesis of the center came in 2013 with the development of a five-year plan for D-B under Ailshie. Moorhouse said he inherited the project when it was well underway after Ailshie became a Tennessee deputy commissioner of education, a position from which he recently retired.