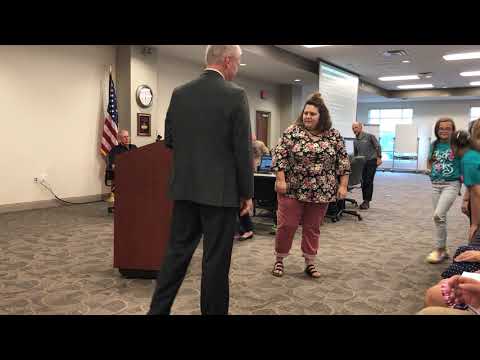 The informal consensus at Thursday’s school board meeting seemed to be the Monday after, meaning that students would get an “extra” 10th day off combined with the nine days off, including two weekends, when teachers and students otherwise would be out of school.

WHY THE SCHOOL CALENDAR QUESTION?

Some board members balked at a draft calendar recommendation from Administrative Support Center staff and presented by Assistant Superintendent of Administration Andy True, that the in-service be Monday, Oct. 5, followed by a fall break Oct. 12-16, instead suggesting a Friday, Oct. 9 in-service so students would get eight days in a row, including weekends, rather than a day off, four days at school and then seven days off.

Julie Byers said that some parents plan trips or vacations during the break and that an extra day would be attractive, with Vice President Eric Hyche agreeing. However, President Carrie Upshaw said that the question would affect mostly elementary students since high schoolers involved in band and football, more than 500, would be tied up with football games, and that probably only 20 percent of elementary students made a trip to Disney World or some distant vacation destination.

Welch, a former teacher, said the problem with a Friday day off is that parents and some staff want to start vacations a day early, on Thursday, when plane tickets would be easier to get, which would lower attendance that day. “Our daily attendance on the 8th will take a hit,” Welch said. He also said many parents can’t afford a big vacation or any vacation and instead must come up with day care money.

WHAT ABOUT ANOTHER MONDAY?

She said the effort to move away from Friday in-service days came after an in-service day on a Friday last year coincided with a football game at Oak Ridge, with teachers leaving early to attend the game and missing in-service opportunities. However, Byers said those teachers should have had plenty to time to get to the game since in-service ends at 3 p.m., but Stringham said the best idea is “not that whole hubub of a Friday” for in-service.

Welch said the board seems pleased with the rest of the draft calendar, which closely mirrors this year’s and would include a student start date of Aug. 3, fall break, a standard three-day Thanksgiving break, the last day a half-day Dec. 18, a return to school Jan. 5, spring break March 29-April, the last day of school a half-day May 19 and high school graduation May 22. Standard holidays also were included.