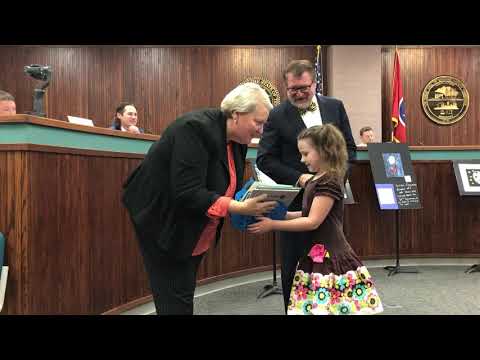 BLOUNTVILLE — Twenty-one Sullivan County Schools students have been honored for their work in the myON reading program. They either read at least 100 books or had the best reading improvement at their school in the 2018-19 academic year and over the summer.

Each of the students at Thursday night’s monthly county school board meeting received a certificate and goodies basket with seven books, and each will later receive a $25 Barnes and Noble gift card. The system has awarded myON high performers for the fourth year.

“It’s kind of like having a digital library in their backpack,” said Robin McClellan, supervisor of elementary education.

Among all students in the program, students in Sullivan County Schools read 121,077 books for a total of more than 1.5 million minutes of reading. The effort reinforces the school system’s recommendation, as well as that of educators nationwide, for all students, but particularly young ones, to read at least 20 minutes a night.

Bluff City and Miller Perry elementary schools tied with the most students honored at five each, followed by Indian Springs Elementary with four, Central Heights Elementary with two and one each at Sullivan Gardens K-8, Mary Hughes (a K-8), Holston Elementary, Emmett Elementary and Blountville Middle. The students either read at least 100 books or had the best reading growth in their school.

The board also got a report from Brent Palmer, high school system curriculum and instruction supervisor, on the 2019 Tennessee Report Card results, as previously reported from the Aug. 29 work session.

In a nutshell, the district overall got a Level 4 or Advancing on the Tennessee Value-Added System on a 1-5 scale, with results including a decrease in chornic absenteeism and increases in English language learner proficiency, Read Graduates, the graduate rate and the composite ACT score. On the bad side, Algebra I scores of On Track or Mastered fell from 26.5 percent to 21 percent, but all other areas grew, with the largest improvement being in English II, from 35.8 to 45.8 percent.

That helped lead the way for a districtwide Level 4, including a 5 in literacy, 1 in numeracy, 4 in literacy and numeracy combined and 4 in social studies. The system had two schools targeted for support and improvement and seven Reward Schools. The Reward Schools make up 32 percent of the district’s 22 schools.