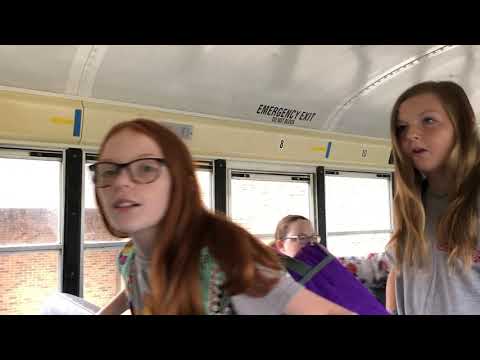 BLOUNTVILLE — Some Sullivan County public school students in the Sullivan Central High School zone got to meet new Director of Schools David Cox on their bus ride the first student day of the 2019-20 school year Monday. But they didn’t quite realize who he was.

Sullivan Central juniors Meghan Lyon and Isabella Jones unknowingly sat across the aisle from Cox on Bus 113. He sat in the right front seat of the C&S Transit bus driven by Joe Baker on the morning high school route, welcoming high school students and later middle and elementary school students for the second segment of the run.

While awaiting their connection to Central, via Bus 106, at Holston Elementary and Middle School, the two juniors learned the identity of the bow-tied Cox.

“We got a new director of schools,” Meghan said before being told he was sitting across from her and her friend.

Elsewhere on the route, parents waved to their children boarding the bus, although in some cases they didn’t wave back as they reconnected with friends, classmates and neighbors.

Cox, a Hawkins County native who came from Allegany County, Maryland, but also has worked in Virginia, said he borrowed the idea of a first-day bus ride along to get an idea of where students live, the literal lay of land and because he really likes the excitement of the first day of school. After the second run for elementary and middle students, he got off the bus to wish a good day to the students.

“I got the idea from another superintendent. It was his tradition,” Cox said. “I just really enjoy seeing the kids.”

THE WHEELS ON THE BUS GO ROUND AND ROUND

Baker said the route went well for the first day. After leaving the Central parking lot about 5:46 a.m., he made his first high school pickups in areas around Boone Lake and Tri-Cities Airport at 6:03 a.m. The elementary and middle run, which covers the same territory and in some cases the exact same roads, started about 6:45 a.m.

Around 7:30 a.m., a deer crossed the road in front of the bus, one of about half a dozen that morning along the route.

“That’s one thing I like about the job. I like to see the wildlife,” Baker said, later pointing out some turkeys along the way.

Cox said some of the route reminded him of Carter and Stanley valleys near where he grew up in Hawkins County.

So far, Cox said, he’s visited inside Central High and Emmett Elementary, with his Holston visit limited to outside the school. He plans to visit all schools in the system as time and circumstances allow, and he said next year’s bus ride will be in another part of the county.

Cox said he’s already finding connections in the school system, including a teacher who is the daughter of two folks who attended Surgoinsville High School with him and a principal, Jonathan Fields, who grew up not far from where he did in Hawkins County.

During convocation last week, he also met a teacher who was a student of his when he was an assistant band director at Dobyns-Bennett High School while pursuing his advanced degrees at East Tennessee State University, where he got his bacehlor’s, master’s and Ph.D.

His first school board work session is 5 p.m. Thursday, and his first voting meeting is at 6:30 p.m. the same day at the health and education building near downtown Blountville.