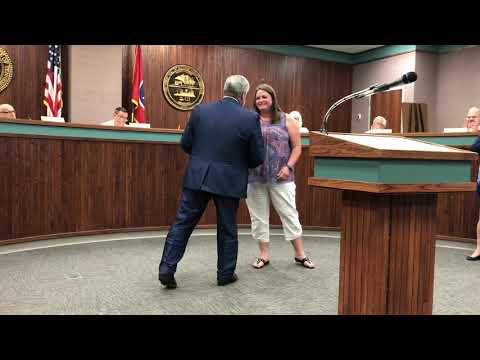 The Sullivan County Board of Education gave a unanimous nod to an annual $134,000, four-year contract for new Director of Schools David Cox on Thursday night. The board also voted 7-0 to approve a one-month contract extension giving retiring Director Evelyn Rafalowski a one-month pay increase matching his new pay. Both were discussed at the board’s May 30 work session.

In addition, the board approved a new 12-month contract for The Video Guy to livestream voting meetings for a flat fee of $150 a month and approved tenure for 34 teachers, although the board did not have the chance to consider a recommendation to terminate tenured Bluff City Elementary School teacher Beverly Moore. That item was removed from the agenda. Moore is now being represented by a Tennessee Education Association attorney.

“I’m excited that I got a 7-0 vote. Thank you,” Rafalowski quipped to the board as her plans to wrap up a 42-year career with the school system and four years as director were extended to include the month of July. Cox, who is leaving a decade-long job in Maryland, is to start Aug. 1.

“I’m honored to stay until Dr. Cox is able to get here in August,” Rafalowski said. “I know that our school district is going to embrace him.”

WHAT ARE DETAILS OF CONTRACTS?

Cox will be paid $134,000 a year starting Aug. 1 in a contract set to expire on June 30, 2023, unless renewed or extended by the board. If the board doesn’t take action six months prior to the expiration, it will be signaling it does not plan to retain Cox. He would receive an annual raise equal to the cost-of-living raise given to professional staff, which this year is to be 0.5 percent but will not go to Cox because his contract starts a month later than the fiscal year start of July 1.

BOE Chairman Michael Hughes said that two other things Cox wanted and got in the contract were the school system paying the employee portion of his retirement as well as the standard employer portion, which would cost about $6,700 a year to start, and that if the board unilaterally terminated Cox without cause during the contract term he would still be compensated for his entire contract even if he found other employment within the contract period.

That would not apply if he left by mutual agreement or for cause. Board member Mark Ireson asked why the third scenario was added, and school board attorney Pat Hull said that Cox requested his pay not be reduced by the amount of pay at a new job. Hull said it was unlikely that provision ever would be enacted.

“He’s taking a huge cut in salary to come here,” Hughes said, adding that unilateral board termination without cause would be a “self-inflicted injury that we could control.” In Alleghany County, Maryland, Cox is making about $180,000 a year, with a $1,200-per-month car allowance.

The Sullivan County contract also gives Cox $200 a month for a home office, Internet and cell phone, actual relocation expenses up to $10,000. a vehicle allowance of $800 a month and standard health and dental insurance, as well as a $26,000 life insurance policy. It calls for paying dues and other expenses of belonging to professional and civic organizations and would pay him mileage, meals and other expenses associated with out-of-county travel pertaining to his position.

Rafalowski’s contract was amended to pay her $11,166.67 for the month of July, which is what Cox’s contract salary will be per month starting on Aug. 1.

Cox is a native of Hawkins County, a graduate of Surgoinsville High School with bachelor’s, master’s and doctoral degrees from East Tennessee State University in Johnson City. He and his brother still own family property in Hawkins County, and Cox said he is looking forward to returning home to Northeast Tennessee. Per his contract, he must live in Sullivan County by July 1, 2020.

WHAT ELSE DID THE BOARD DO?

At the behest of Ireson, the board also voted to increase teacher pay for professional development from a long-standing $20 an hour to $25 an hour, which Rafalowski said might reduce the number of professional development hours but would put pay in line with basic beginning teacher pay. The board also approved tenure and various grants and fiscal year-end budget changes and honored a Girl Scout and the Robotics teacher/coach at Holston Valley Middle School.