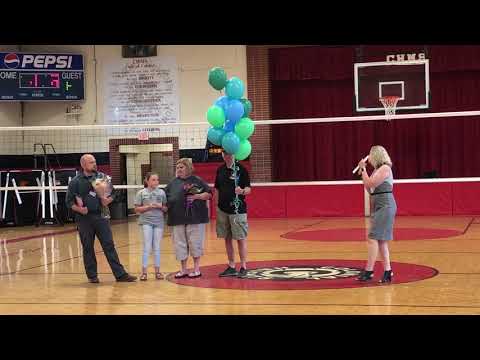 And her late uncle, Sullivan County Sheriff’s Sgt. Steve Hinkle, who died in the line of duty earlier this year, apparently thought she had artistic talent, since he gave her a craft kit this past Christmas.

The 11-year-old got word earlier this month that she won one of 53 slots nationwide for the Doodle for Google competition, thanks to her drawing of an octopus entangled in trash at the bottom of the ocean. That puts her in the running to be one of five finalists for the national contest, as chosen by voting June 3-7 on Doodle4Google.com. A winner will be chosen from among the five by a panel of three judges: 2018 Teacher of the Year Mandy Manning, Kermit the Frog and “Tonight Show” host Jimmy Fallon.

WHAT DOES HER DRAWING MEAN?

“We’ve got to clean our environment,” Katie said the afternoon of May 17 at her school, after a surprise presentation of a certificate with her “posse” of 12 family members and friends waiting in the wings. They included her mother and father, who came to the center of the gym, and art teacher Matt Oerly. Sullivan County Schools Supervisor of Technology Karen Nave announced the award.

A news embargo on all 53 national winners expired at noon Thursday, the day Doodle for Google officials came to Katie’s home to present her with prizes and other items.

“I like ocean cleanup, and I didn’t like that there’s so much trash,” said Katie, who has visited beaches at Hilton Head, Myrtle Beach and Charleston. “I’m not very good at it (art and drawing) but I like to.”

The contest in its 11th year challenged students to draw something representing how they would finish the phrase: “When I grow up, I hope ...”

“That’s what they challenged the student to answer,” Oerly said of the grades K-12 contest.

For being chosen tops in Tennessee, Katie received the school assembly presentation, Google hardware and “fun Googley swag,” according to an email from Google representative Marfry Hernandez. Katie also will get her art on the Doodle for Google Art Gallery.

“She loves to draw. She loves to paint,” mother Tammy said as she and husband Frank awaited the start of the surprise ceremony. As a national finalist, Katie is in competition for a $30,000 college scholarship, having her artwork featured on the Google.com search engine website for a day and a trip to Google headquarters in California.

The four national finalists who don’t win the grand prize will get a $5,000 college scholarship and a trip to Google headquarters.

Fillers said Hinkle, who was shot in a standoff near Blountville Feb. 23 and died Feb. 26, gave his niece a craft kit for Christmas because he knew she liked arts and was good at it.

Oerly said every student at Colonial Heights Middle the past two school years has participated in the Doodle for Google contest. If Katie wins the top prize of the $30,000 college scholarship, the school will get $50,000 to be used on technology.

“I was happy that she talked about something meaningful” in her entry, Oerly said.

HOW CAN YOU VOTE FOR KATIE?

To vote for Katie or any of the others, go online to Doodle4Google.com. The voting window is open June 3-7.