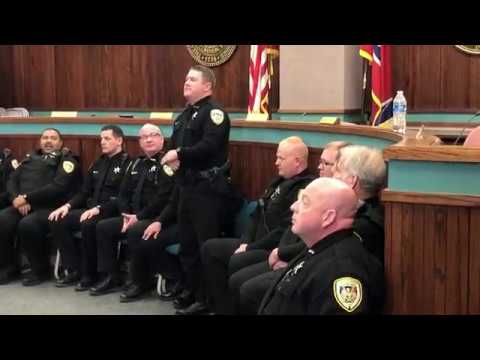 BLOUNTVILLE — School resource officers in Sullivan County are in place and official at all but one school, education and law enforcement officials said Wednesday, and Director of Schools Evelyn Rafalowski said that facility is being covered by other SROs until the last officer is trained and ready, which Sheriff Jeff Cassidy said should be by this fall.

“It demonstrates the commitment we all share” to keep students safe,” Stanley, chairwoman of the commission’s Administrative Committee, said of SROs, adding that aside from being defenders, they are role models and confidantes for students.

The program was expanded from one SRO at each of the four high schools to 18 SROs in the 2019-20 budget. That is one SRO per campus, which because some  schools share campuses means that all 22 schools will have an SRO presence using the 18 SROs.

“I would like to welcome our SROs to our school family,” Rafalowski said.

“This did not happen without a lot of support,” she added, lauding the county commission and school board. “I am grateful for the support and investment.”

HOW MUCH DOES THE PROGRAM COST?

For the first year, Rafalowski said, the program will cost the Sheriff’s Office $966,000 and the Board of Education $358,000. After that, the cost will fall to $757,000 for the Sheriff’s Office because the initial purchase of equipment and vehicles will be completed, and it will remain at $358,000 for the school system, although those amounts will increase as employee pay increases. The BOE’s share is half of the SRO’s wages.

None of the state school safety grants are being used for the program, Rafalowski said, because that money is uncertain from year to year. The safety funds have been used for putting in more secure entrances needed at some schools as well as the new Raptor visitor management system. In addition, next week LLumar window protection film, made by Eastman Chemical Company, will begin to be installed in phases at county schools on selected exterior and interior glass.

The more secure entrances have been installed at Holston Elementary/Middle School and Indian Springs Elementary, and one was already in place at South. The new West Ridge High School, set to open in the fall of 2021, and the new Sullivan East Middle School, to open in January of 2020, will use Lomar and other safety equipment and programs, Rafalowski said.

She said the 1,700-student West Ridge is being built with space for at least two SROs and plans call for East Middle to have one.

WHAT IS THE SRO TRAINING?

The officers also are trained for LEAD (Law Enforcement Against Drugs), similar to the old DARE (Drug Abuse Resistance Education) program. LEAD is in place as a pilot program for fifth-graders at Emmett, Central Heights and Ketron elementary schools and Sullivan Gardens K-8.

The officers also will help train faculty and staff at schools using, among other things, tabletop exercises.

“They always wear a lot of different hats,” Cassidy said.

“I’ve got a lot of calls and letters in the mail,” Cassidy said of positive feedback from parents.

Rafalowski said that at Sullivan Gardens K-8, one of the students spontaneously came up to an SRO and kissed his hand when students presented the SRO with their drawings of the SRO.