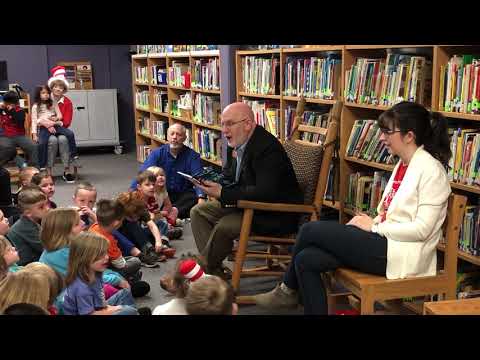 
Cat in the Hat, Seuss in the library?

KINGSPORT — Was Dr. Seuss on the loose at Roosevelt Elementary School? My, oh my, but that would be cool.

“He’s here,” a Roosevelt student proclaimed when he walked into the library Friday morning for Read Across America Day, an annual event when adults nationwide come read Dr. Seuss books to students. But wait, there’s more: at Roosevelt, each student got a free new book and other items in red “swag bags” from United We Read.

Roosevelt counselor Alice Browder said the student had heard so much about the author, also known as Theodor Seuss Geisel, that he just assumed the man with a book to read in the rocking chair was Dr. Seuss. The author died in 1991, but March 2 would have been his 115th birthday. Instead, the man in the rocking chair was Kingsport City Schools Superintendent Jeff Moorhouse, who’s not 115 but, it turns out, was back on the job the first day after being sick the rest of the week.

“What a way to start the week, to be with students,” Moorhouse said.

Students in several groups went to the library to hear Moorhouse read from age-appropriate selections and to hear United We Read manager Emily Merritt emphasize the importance of reading 20 minutes a day. Roosevelt had Literacy Night Thursday.

“Basically, United We Read is providing a book to every student pre-K through third grade” at Roosevelt, Merritt said before the event. The fourth- and fifth-graders got a new book from the school, and all received a bookmark, magnet, flier for parents and highlighter. East year, the group partners with a local school, and 2019 was Roosevelt’s turn. Merritt later said statistics show half of third-graders in this community are reading on grade-level, while data shows that 74 percent of students who fail to reach this milestone continue to struggle in later grades and often drop out before graduating high school.

In addition, Assistant Principal Philip Wright said that retired Smyth County, Va., teacher Martha Moore last year donated about $15,000 worth of children’s books to Roosevelt, with some of those given out to students Friday. Other books went to the library, classrooms and a mobile book cart.

“Today we are giving away, on top of this, we’re giving away more books,” Wright said. “She just wanted a school that would use them.”

Moorhouse read to the oldest group “Hooray for Diffendoofer Day!” Started by Dr. Seuss but finished after his death by Jack Prelutsky and illustrated by Lane Smith, the book is about favorite teacher Miss Bonkers and the quirky Diffendoofer School, which must prove through mandatory testing it has taught its students how to think or have them sent to dreary Flobbertown. He said that was his favorite Seuss book and he has a copy of it at home.

Moorhouse said the tale rings true since students at Roosevelt will take standardized tests in the spring.

The youngest group heard “The Cat in the Hat,” responding with laughs and smiles at the book’s description and drawings of the cat balancing a fish in a bowl, toys and other items on a rake indoors on a rainy day, which Moorhouse said was not unlike the current weather pattern of rain, rain and rain.

In Wise County, Dr. Seuss got an early birthday party at UVa-Wise’s Greear Gymnasium, courtesy of the Southwest Virginia Education Association and the college’s Education Department.

An estimated 250 children, parents, grandparents and relatives watched a re-enactment of “Green Eggs and Ham” by UVa-Wise education majors, including Sam, rain, a fox, mouse, car, goat and train.

Kids made their own Cat in the Hat costumes with guidance from the Cat himself, got to take pictures with the Lorax and played a variety of Seuss-themed games.

In the most important part of any birthday party, the children enjoyed two large birthday cakes and punch.