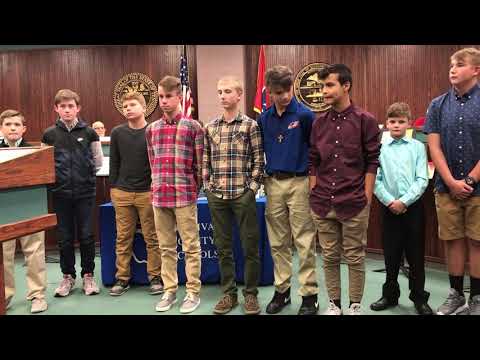 The team this year had 36 wins and 1 loss, with a three-year record of 102-9. Following is a roster, with an asterisk denoting those who have been on the team three years:

Also in a presentation by Smith, the BOE learned that the Eagles won the Big 3 Conference championship and had a 10-0 record for the year. The team also was the Area I AA state sectional champions. Its average margin of victory was 41-10, and the Eagles offense averaged 342 yards per game.

The defense set a school record with 26 takeaways.

Eighth grade halfback and linebacker Roy Moody set a school rushing record of 1,575 yards for the season, as well as a rushing touchdowns record of 28 and 69 tackles. Eighth grade quarterback and safety Luke Jenkins passed for 922 yards, completed 53 of 81 pass attempts, made 17 passing touchdowns, a school record, and had no interceptions.