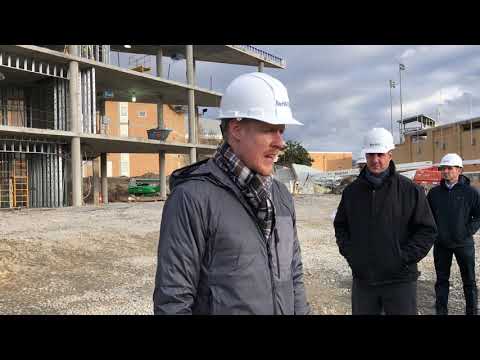 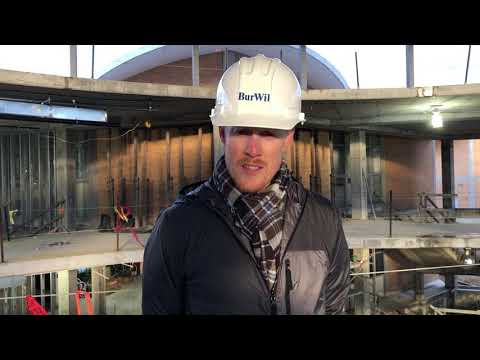 “Education is not the learning of facts, but the training of the mind to think.” — Albert Einstein

KINGSPORT — If architect Stephen Trimble had to use two words to describe the new Regional Science and Technology Center  (RSTC) at Dobyns-Bennett High School, they would be “open” and “transparent.” And Superintendent Jeff Moorhouse emphasized the RSTC’s mission is to inspire innovation through science and technology.

“Open and transparent,” among other things, means a panoramic view of nearby Bays Mountain and Chimney Top, much farther away near Greeneville; classrooms that basically have exterior and interior glass walls; large corridors as hallways; and a three-story structure that includes an atrium or middle space that is open three stories with minimal concrete support beams.

On a more practical note, Moorhouse said the timeline for construction by BurWil Construction Inc. of Bristol, Tennessee., is still for a late May/early June completion of the building, setting the stage for D-B to occupy the space in August 2019 for the 2019-20 school year.

“The intent would be we would use this next school year,” Moorhouse said during a tour that was two days short of the anniversary of the Dec. 7, 2017, groundbreaking on the building.

WHAT IS THE CENTER’S MISSION?

The mission of the the RSTC, which will cost more than $20 million — mostly funded by a Sullivan County capital bond issue, is to create a culture that inspires innovation through science and technology. Its five goals, as outlined on an information sheet given to tour participants, are:

5. Utilize the power and flexibility of technology.

Academic programming, Moorhouse emphasized, will including the core science curriculum of biology, chemistry and physics, as well as new courses in oceanography, Advanced Placement seminars and APO research, with additional courses in the three to five years after the center opens to include possible studies in forensic science, artificial intelligence and drone technology. Moorhouse said future courses will emphasize science and technology applications, critical thinking and problem solving “above all else.”

WHAT ABOUT THE ARCHITECTURE USED?

In an architectural nutshell, the more than 70,000-square-foot building with 18 classroom/lab spaces has a “very heavy emphasis on daylighting,” Trimble said. However, he said architects went to great pains to be sure students would be “on display” by being super visible from outside during the day, although he said at night folks in the building would be more visible from the outside.

“It’s never putting students on display in an awkward way,” Trimble said during the tour of the building with education and city officials.

The building was designed with spaces in mind for the Marin Advanced Technology Education, or MATE, underwater robotics team, a National Ocean Science Bowl team and a classroom that is Technology Enhanced Active Learning, or TEAL. That allows for “cross-curricular collaborations to take place in a state-of-the-art environment,” according to a handout tour participants received.

It also will include a specialized research lab, multiple collaborative spaces, new school resource officer and administration offices and storage for long-term projects.

During the tour of the under-construction building with Board of Education members and Board of Mayor and Aldermen members, Trimble took them and folks from the school system and D-B administration on a walking tour of the three-story project, which in addition to being the new home to science classes at D-B will be the new “front door” of the school.

“There is a tremendous amount of transparency in this building,” Trimble told those on the afternoon tour in the well-air-conditioned building, which still has many open areas where glass walls eventually will envelope it. Trimble and John Pelker, project manager, work out of Atlanta for Perkins + Will, the architectural firm for the project.

In addition to openness, he said the building is designed with flexibility in mind, including classroom space that can be partitioned off into smaller spaces or opened up with collapsible walls for larger lecture space. Trimble comes to the construction site every two weeks and has seen the building emerge from the troublesome “expansive shale” found on the football and baseball stadium end of the project and the less-troublesome end toward the old Legion Pool site.

OPEN SPACES OUTSIDE AND INSIDE

Outside classroom space is positioned between the existing and new construction. Inside, Pelker said the sky’s not the limit but ceiling height is higher than it would be without using concrete supports. Cantilever construction allows interior hallways along the sides of the triangle to hang over the floors below. Board member Todd Golden and others said they wondered about the possibility of band, choral and other music performances in the space.

Pelker said the concrete construction is more expensive but allows fewer columns than steel construction, and he said the extra expense is a “wash” in the budget in the end.

Open staircases, which Trimble likened to ones in old Southern mansions, abound, although an elevator will be tucked away near the building’s center.

Trimble said a tricky part of the whole project was to interface with the existing yellow-brick D-B that opened in in 1967. The triangular addition will have access to and from the existing building with bridges between the two. Yellow brick exterior walls visible from inside the addition will be taken out, he said.