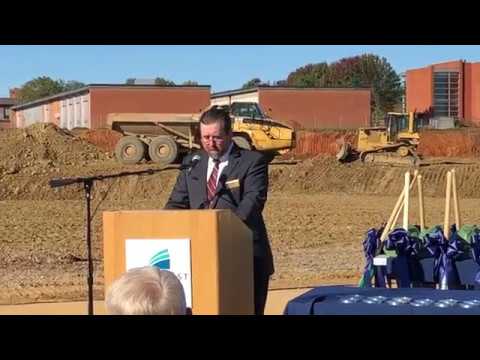 BLOUNTVILLE — A man with a barely running car crept the old beater into a garage one day, asking the mechanic on duty to fix the car so the man could drive to a job interview.

The mechanic obliged, using a computerized analyzer and twisting a few “gadgets” for the fix. The bill was $101, which surprised the man and prompted him to ask why so much for twisting some gadgets.

The mechanic answered: “One dollar is for twisting the gadgets, and $100 is for knowing which gadgets to twist.” The mechanic went about his work the rest of the day, while the man went to his job interview.

Interim Northeast State Community College President James King told that story Tuesday morning to show the need for that kind of knowledge and explain why the college broke ground on its new Technical Education Complex. He also said the new building is important for current and future Northeast students, as well as the region’s businesses, industries and general public.

Sam Rowell, Ph.D. and vice president for academic affairs at Northeast, gave a rundown of what would be housed in the building.

The building will have two main floors and a courtyard level to house division offices. It also will house classrooms, lab space and faculty offices for Advanced Technologies, as well as lab space for instruction in computer numeric control or CNC machine, welding, HVAC/electromechnical, electrical and wiring, magnetics and motors and programmable logic controllers or PLC/mechantronics. In addition, Entertainment Technologies, part of Business Technologies, will have a lighting and sound lab, recording studio and sound editing room on the first floor.

The Northeast project was halted for financial reasons about a year ago, a decision King made in the aftermath of “right-sizing” Northeast’s budget with $5 million in budget cuts, but the new home for technical education concept dates back to plans made almost 30 years ago. Now the wait is over, and if the weather cooperates, plans are for the 114,475-square-foot facility to open in time for spring semester of 2020.

The building is the largest and most expensive capital project in the history of Northeast and community colleges across Tennessee, TBR member and Kingsport Chamber of Commerce President Miles Burdine said. The project beats a recent $20 million project at Walters State Community College’s Greeneville/Greene County campus. For perspective, the building will be about twice the size of the school’s library.

King poked a little fun at Dick Tracy, not the fictional detective but executive director of facilities development for the Tennessee Board of Regents, saying that Tracy had delayed the project by 12 years. Tracy shot back “15 years.”

King took over in mid-2017 after the retirement of Janice Gilliam, who, after nine years heading the school, received a Faculty Senate and then full faculty vote of no confidence amid allegations of financial mismanagement and a “climate of fear” among some employees. She retired after a Tennessee Board of Regents probe found no criminal or civil wrongdoing but made findings including overspending and overestimating revenues.

“Actual construction cost is to run just less than $30 million, but King said that with the cost of equipment the total cost will run about $36 million with about $3.8 million coming from grants and local fundraising. “There is no contribution too small,” Paul Montgomery, vice president for access and development, said of the still-active fundraising for the project.

“I think it’s a testament to how far this college has come in one year,” King told about 100 people gathered for the groundbreaking on a crisp but sunny late October morning, when he called what had been branded the Emerging Technologies Complex a “crown jewel” of the college and region. “This building has been long needed by the campus and community.”

NODS TO PAST, FUTURE

“James came in, frankly, at a very difficult time for Northeast State Community College,” Lundberg said before the crowd, which included Northeast students, faculty and staff, clapped for King. Lundberg told the students the building is “not just about bricks and mortar but about you as individuals” and that the project is “not just about where we are but where we are going.”

As a Northeast graduate, Hill thanked his professor “for passing me” but on a serious note said it took King’s right-sizing, state funding and private donations to make the project a reality. He also said it will be a place where folks are trained to work at the Aerospace Park at the adjoining Tri-Cities Airport.

Ohio-based Messer Construction Co. is the contractor of the project, which replaces two buildings where Rowell said the first technical programs were taught in 1966.

John Fisher, of Fisher and Associates Architects Inc., lead architect for the project, said he “almost” felt “as old as dirt” used for the groundbreaking because in 1989 he helped with a master plan that included a technical education structure to take the place of two buildings from 1966 that will be torn down when the new building is done.

“This has been a 30-year quest to get to this day,” Fisher said.