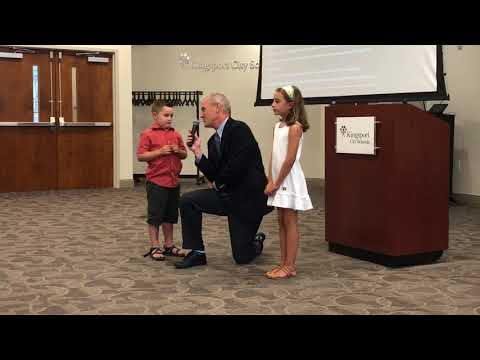 Kingsport Board of Education

KINGSPORT — The city school system’s participation in Read to be Ready over summer break helped 65 rising first-, second- and third-graders with reading and writing over a month’s time. The students were among the more than 8,000 youngsters at more than 200 schools across Tennessee who participated in the state-funded $8 million program.

This marks the second consecutive year Kingsport City Schools qualified for the program after it failed to do so the first time. Debbie Allen, family liaison at Kennedy Elementary,  told the Board of Education at its Tuesday meeting that the program was again held at Lincoln Elementary because of its central location, but that it included students from all eight city elementary schools based on recommendations from teachers.

Amy Doran, coordinator of early childhood programs and a grant writer for KCS, said the school system is “just going to go for it” for a third consecutive year. Superintendent Jeff Moorhouse said he is confident the state will fund the program at least one more year.

In the summer of 2017, the Kingsport version served 60 students, compared to 65 this year, although the system had requested funding for 90 and got recommendations for 150.

Allen said the the program targets students struggling to be at grade level with reading. She and the 13 teachers who staffed the program underwent professional development in Knoxville in February, giving the program a teacher-pupil ratio of 1:5. Students received free bus transportation to and from Lincoln, either to and from their homes or to and from various summer programs some attended, and they received lunch through the Summer Feeding Program and snacks.

In one exercise called a reading train, students lined up chairs in a row, read a book for a set time and then passed the book on to the next student. The group also took five field trips: to Brights Zoo, Appalachian Caverns, Exchange Place, the Bays Mountain Park Planetarium and Barnes and Noble, where each received $50 to $60 worth of books they chose. The total value of the books was more than $15,000. They also had family days during the beginning and ending weeks, as well as a United We Read presentation — one on snakes from Bays Mountain and ones from author Lucy Brennan, who wrote “Roof Octopus,” and author Kim Norman.

Allen said pre- and post-testing indicated an increase in students’ accuracy and motivation in reading.

In voting actions, all 4-0 with member Susan Lodal absent, the board:

— Approved the purchase of two Transition School to Work eight-passenger Ford vans for $52,738 from Empire Ford; a high-top, nine-passenger van with wheelchair access for that same program from Central States Bus Sales for $47,826; an eight-passenger Ford Transit 150 van for Dobyns-Bennett High School athletics; and a Ram Pro Master City cargo van from Auto World of Big Stone Gap, Va., for $22,977. The latter vehicle will be dedicated to providing D-B-prepared breakfasts and lunches to Cora Cox Academy and paid for through the self-supporting school nutrition operation.

— Approved a bid of up to $15,000 from Summers Industrial Supply for chemical products for School Nutrition Services.

The revised ones clarify that liability insurance covers work-based learning students; clarify that family medical leave no longer has a limitation on the number of sick or annual maternity or paternity days that can be used; update the progressive truancy actions required in attendance policy; add an “assault that results in bodily injury” to zero-tolerance policy; and clarify mandatory reporting of suspected child abuse and neglect, pointing out that in 2019-20 teachers must have annual training on that topic. The new policy says transcript alterations are done only by school system employees. A proposed revised policy delayed until a Sept.  13 vote would revise the weighting of TNReady standardized test scores.