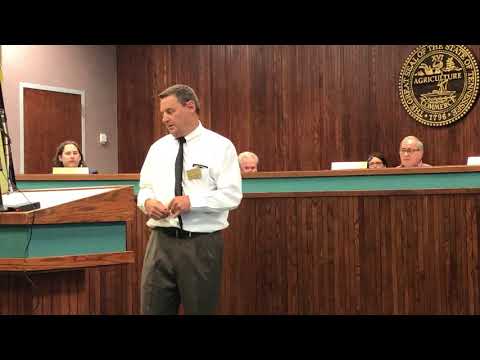 BLOUNTVILLE — In response to questions about funding the road to Sullivan County’s new high school, Board of Education Chairman Michael Hughes on Tuesday night said the $140 million bond funding for capital school projects should have provided an extra $18 million the county system did not receive. He also said the county should not count on nearly $2 million in annual funding from a school bond that will be paid off next year.

In addition, Hughes said he doesn’t see how or why the school system should pay any of a $3 million road project to serve West Ridge High School off Exit 63 of Interstate 81, and he said a proposal for a project manager hired jointly by Director of Schools Evelyn Rafalowski and County Mayor Richard Venable would be illegal based on a Rutherford County lawsuit ruling and ill advised to boot.

In a presentation to the school board at its regular meeting Tuesday, Hughes laid out a series of calculations he’s worked on over the past five months that he said show serious errors in how the bond issue was distributed, as well as plans to repay it. His presentation comes as controversy over a proposed $3 million road to West Ridge, which is to open in the fall of 2020. The commission is to meet in a work session at the old County Courthouse at 4:30 p.m. on Thursday, with school officials invited to address the road issue. A similar meeting set for last week was to have been followed by a voting meeting the next day, but both were canceled.

WHAT’S THE GIST OF HIS CASE?

In a nutshell, he said that according to copies of documents County Commission Budget Chairman Eddie Williams faxed the school system in late November, the county after next year plans to take $1,913,600 a year for almost 30 years to fund repayment of the bond. That money has been going toward a $24 million ESG energy savings program loan and is from Tennessee sales tax already shared with Kingsport, Bristol and Johnson City.

Another $500,000 is to come out the first year and $104,640 each year thereafter for 29 years, according to the documents Williams provided but Hughes said he and most county commissioners had never seen. Hughes said if the more than $1.9 million is to be taken, which he said he doesn’t believe it can be, then he said the county school system should have received an extra $18 million  beyond the $67.1 million it got from the $140 million bond issue, which among other things will fund the new high school and new Sullivan East Middle School.

The solution, he said, is either the county provides a lump sum of $18.7 million to the school system or does not expect the school system to pony up almost $2 million a year or about $62 million over the life of the bonds. Hughes said he’s checked with the Tennessee Department of Education on the issue.

That $18.7 million would have come out of the cities’ shares. However, city and city school officials in Bristol and Kingsport remain upset about funding not shared with them because the county increased lease payments for athletic facilities to the county system and did not have to share that money with the cities, leaving the city to make up local maintenance of effort for their school systems.

WHO FUNDS THE ROAD?

Hughes said that on Jan. 17, 2000, and at a later meeting the commission approved funding for a connector road near Tri-Cities Airport to serve Northeast State Community College, using the Highway Department’s undesignated fund balance as Commissioner of Highways Jim Belgeri had proposed.

He also said nothing about the school system funding the road was in the December 2016 bond resolution, and that he was told by someone he declined to identify it was the Highway Department’s responsibility. The school system. to his knowledge, has never funded a public road to the school but the county has for Northeast.

If the $2 million a year in payment remains, he said the school system would pay $62 million over the 30 years, or up to $110 million if other soon-to-expire bond payments are taken by the county to repay the debt. That would be more than the total amount county schools received even if Kingsport hadn’t paid $20 million for Sullivan North High/Middle School.

WHO HIRES THE PROJECT MANAGER FOR NEW SCHOOLS?

Hughes also said he believes a Rutherford County lawsuit ruling clearly says that the county’s responsibility is to fund schools and the school system to building and operating them. He said the county had proposed the mayor-director appointing a position for which each would share a $65,000 cost, but he said checks with the Tennessee School Boards Association and board attorney Pat Hull found that illegal.

“He will answer to us and no one else,” Hughes said of a potential project manager solely hired by the school system and reporting solely to it. The December 2016 resolution of the commission approving the bonds mentions a joint project manager insomuch as it is legal, but Hughes said that is neither legal in Tennessee or desirable.