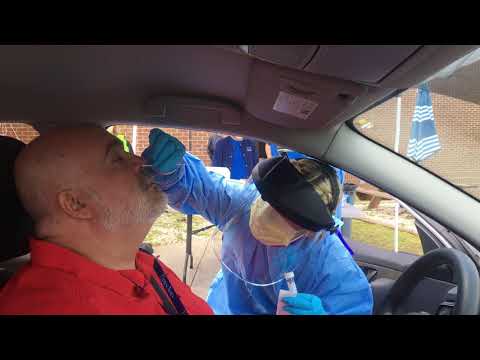 BLOUNTVILLE — The Sullivan County Regional Health Department continues to offer free drive-thru testing for COVID-19 and will expand Friday only to the V.O. Dobbins Community Center in Kingsport (301 Louis St.).

Testing at V.O. Dobbins is scheduled for 9 a.m. to noon.

Testing will continue through May 1 at the Blountville office (154 Blountville Bypass), from 1 to 4 p.m. Monday through Friday.

On April 30, testing will be available from 9 a.m. to noon at the Slater Center in Bristol (325 McDowell St.).

Gary Mayes, health department director, said the agency will continue providing testing in the coming weeks. Mayes said the expansion of the service to include days in Kingsport and Bristol is just the first step in making testing more widely available, and other areas of the county will have testing sites in the near future. Mayes said the health department is partnering with Ballad Health to expand the testing.

Since testing began on Monday of this week, Mayes said, 363 tests had been administered as of Thursday. To date, no positive cases have been reported, but the results of many of the tests aren’t yet available.

The testing method will be a nasopharyngeal swab and results could take five to seven days. This is the test where a swab is inserted into one of your nostrils. Mayes said some people find it uncomfortable, but it only takes a couple of seconds. Some who have had the test said it is painful.

What the test tells you

This is not the “antibody” test. It will show a positive result only if you are currently positive for COVID-19. The antibody test, which will reveal if someone has already had the virus, is not being given during this effort. But Mayes said the health department expects to begin offering those soon.

Why testing is important

Testing as many people as possible will help health officials get a clearer picture of how many cases there are in communities across the region and the nation, Mayes said. The numbers also help health officials better understand how contagious COVID-19 is in particular areas and gives insights into how well mitigation efforts like social distancing are working.