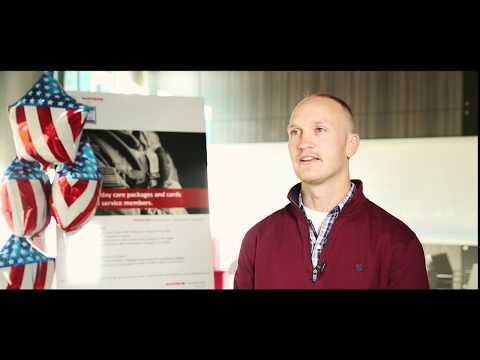 KINGSPORT — When you talk to Eastman employee Jacquelyn Keeney, you hear her passion for Eastman’s Supplies for Soldiers initiative.

She is a military veteran herself.

“For many of the military personnel in our community, Supplies for Soldiers is a great way to be reminded of the support we have at home,” Keeney said. “When a member is deployed, like my dad was when I was a kid, it takes an emotional toll on them to not be with their families, especially over the holidays. Supplies for Soldiers doesn’t replace tradition, but it reminds them that they’re still a part of a larger family.

“I know how much it has meant to me and my family over the years to feel the love and support from people back home, and I’m proud to be part of a program like Supplies for Soldiers and play a small role in supporting those who are serving their country overseas. Every donation is a gift to someone, and one that I’m certain won’t be taken for granted.”

Eastman, along with several community partners and neighbors, collected a record-setting 56,300 items last year to fill care packages for more than 110 deployed military personnel to share with their units.

For Keeney, being in the armed forces wasn’t just something she did. It was a way of life. Her dad was in the Air Force for 28 years, one brother served for 12 years, and another brother and sister-in-law are currently serving and stationed in Alaska as KC-135 pilots. Serving in the United States military has, in many ways, become a family tradition.

Being in the Keeney family meant that Jacquelyn would spend multiple holidays without her father at home. When she was in sixth grade, she recalled, her dad was deployed over Christmas and New Year’s.

“That year, Christmas wasn’t terrible, but New Year’s Eve felt like there was a hole in our family. I didn’t realize there would be a hole in my dad’s heart, too, while he was gone,” Keeney said.

When she turned 17, Keeney took a leap of faith and told her parents she wanted to be a part of the Air Force, and 11 days after she graduated from high school, she left for basic training to join the Tennessee Air National Guard.

“Serving was in my family’s soul,” Keeney said. “Sharing in those ceremonies and service is so important to who my family is.”

Monetary donations can be made online through the Eastman Foundation. All donations will be used to purchase items for the care packages. For a full list of acceptable donation items or to donate online, visit https://responsibility.eastman.com/supplies.