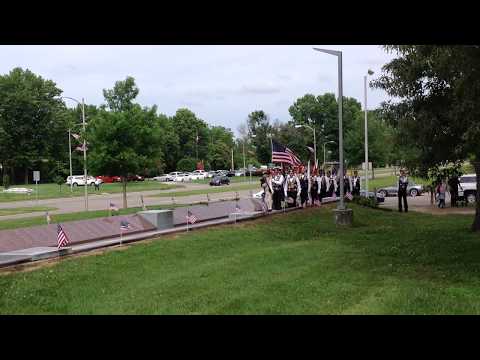 KINGSPORT — A solemn crowd gathered Monday at the Kingsport Veterans Memorial for a Memorial Day Service hosted by the Tri-Cities Military Affairs Council.

TC-MAC, as the organization is known, includes members of the American Legion, AMVETS, Korean War Veterans Association and Vietnam Veterans of America.

Lieutenant Col. Shawn Dodge, U.S. Army, delivered the keynote speech, which touched on topics including the history of Memorial Day, the need to continue searching for those still listed as missing in action (MIA) or prisoners of war (POW), giving thanks to those who have served, and offering support to the families left behind by those who gave all.

Dodge also joined a Vietnam Veterans of America Chapter 979 representative in placing a red, white and blue memorial wreath at the center of the Veterans Memorial.

The service included a “We remember” ceremony and highlighted the “Missing Man Table” with an explanation of each element of that display — which is used to remind us all to never forget the unaccounted for MIAs and POWs who have yet to return home.

One of the most solemn points of the service gave members of the audience a chance to place miniature American flags on a cross of remembrance in honor of fellow soldiers, family members and friends.