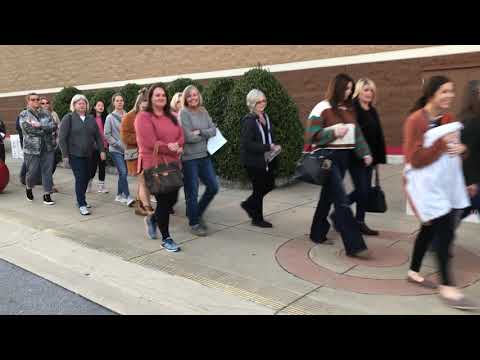 KINGSPORT — Where in the world is Tammy Turner? If it’s 6 p.m. on Thanksgiving Day, most years you can find the Surgoinsville area resident at the Stone Drive Walmart looking for bargains.

Don’t worry. She wasn’t alone Thursday. Her family and thousands of other people were there to keep her company during the holiday shopping frenzy, which started to build in the days or even weeks leading up to Black Friday and will include Small Business Saturday, Cyber Monday, and clearance sales that will continue into 2020.

This year, Turner’s son, who rarely goes Black Friday shopping, was in Walmart, too. In fact, Patrick Turner was in the midst of the mayhem in aisles where washcloths were six for $1.60, along with some $5 towels and all sorts of pillows and other bedding items.

For the record, Black Friday got its name because it was the first day of the calendar year on which most retailers went from being in the “red,” or losing money, to being in the “black,” or making a profit. It has increasingly became an event that launches in many stores Thanksgiving Day and online Wednesday night, although many stores have additional doorbusters at select times and days over the long holiday weekend. Shoppers were swarming stores Thursday night, including Walmart, Kohl’s, Target and Big Lots.

WHAT BROUGHT PATRICK TURNER OUT THURSDAY?

Patrick Turner has become a Walmart employee and worked the afternoon and evening shift on Thanksgiving Day.

Tammy Turner, a cosmetology instructor at Volunteer High School, said that her son had gone out Black Friday shopping with her; his sister, Katie; and father, Kenny, only once in the past, saying he didn’t want to be in the crowds. “And now he’s working in retail,” Turner said. And ironically in an area of the store known for shoppers who get carried away in their quest for bargains.

Unlike most retailers, Walmart stays open 24/7 every day except for Christmas. But the store served drinks and snacks to customers starting at 4 p.m. and gave them store maps and circulars to identify and pinpoint items like the slighly less than $100 40-inch smart television and the slightly less than $150 50-inch smart TV, plus George Foreman copper grills for $10 and household items like Patrick Turner kept organized.

Or course it was difficult to get to or from the towels and washcloths with a row of folks pushing shopping carts, many of them with TVs and a few stacked higher than Jed Clampett’s truck on the way to California with Pioneer Woman slow cookers, coffee makers, pillows, bath mats, etc.

Others were lucky to grab one of the limited number of vinyl record albums for $15 each, including the Beatles’ “Abbey Road” and a Queen album. Record players also were for sale for those into a retro vinyl Christmas. Shoppers in line to pay didn’t have long waits, with every register open and those paying by credit or debit card able to bypass the registers by paying via a wireless device, which looks like a cell phone, operated by roving associates.

Meanwhile, back at the edge of electronics, Tammy Turner was asked where her husband was and replied, “He is putting stuff back he decided not to get.”

Kenny Turner, upon his return, said the family always checks out the movie section. This year, Tammy Turner said the must-have item for the family was a gas griddle grill. Asked why she had no TVs in the cart, Tammy Turner replied, “We got that last year.”

After checkout, she was headed to Bath and Body Works on the other side of town to “stack” coupons, including her birthday coupons, and then planned a trip to nearby Belk and maybe JCPenney.

Another shopper in the Walmart parking lot was Pam Shipley of Kingsport, who in a Thursday Times News article gave her game plan and strategy for Black Friday shopping.

“I got everything I came after,” she said, adding that she got a laptop and 65-inch TV in person Thursday at the Walmart and an iPhone online Wednesday night. Also in the cart were toys her son-in-law, Randy Keyton, bought. She said his job, other than shopping, was to “keep his mother-in-law in line.” At last report Thurdsay night, she was also headed to Bath and Body Works for coupon stacking.

WHAT ABOUT FRIDAY AND BEYOND?

Stores such as Lowe’s, Home Depot and Ollie’s had plenty of Black Friday deals but weren’t open Thursday, instead opening Friday morning. Stores that opened Thursday night generally closed, except for the 24-hour Walmarts on Fort Henry and Stone drives, and then reopened with restocked and new deals Friday morning. Goodwill stores and the Habitat Resale Store also were doing a brisk business with specials Friday, including 50% off all donated merchandise at Goodwill stores in the region.

Downtown businesses also were open Friday, but their day to shine will be Small Business Saturday and will include retailers in and around Broad Street with deals and some with open houses and customer appreciation events, including free refreshments. Those include antique stores.

Next weekend will be the annual Christmas parade and tree lighting downtown, which also draws crowds to browse and shop.

Cyber Monday, the most recent addition to the trilogy that kicks off the holiday shopping season, is the time for online retailers to shine, although many online deals went live Wednesday and mimicked in-store deals. Traditionally Black Friday weekend has become the kickoff to Christmas shopping, although the biggest shopping day of the year is normally the Saturday before Christmas, which this year will be Dec. 21.