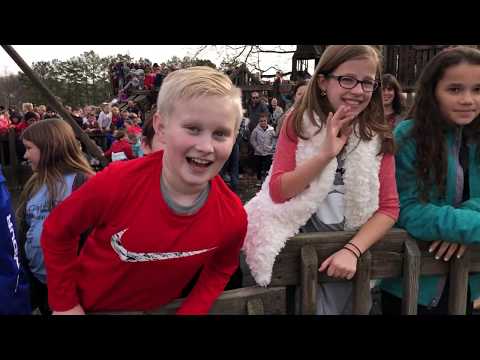 
New Castle Playground to include items from old time capsule

KINGSPORT — The reimagined Castle Playground at Johnson Elementary School will be built in a little more than a month, almost 29 years after the original was built.

But some longtime Johnson teachers didn’t have to reimagine the contents of a 1990 time capsule buried at the playground. After the entire student body had photos and videos taken of them in late December, three hours of digging and searching unearthed the water-logged time capsule buried about three and a half feet directly below the pole supporting the “twisty” slide, Principal Stacy Edwards explained.

The Castle Playground has entertained young residents of Kingsport and the Tri-Cities area for decades, according to the website for the project, castleofkingsport.com. City of Kingsport Parks and Recreation officials have said it is the second-most-used playground in the city, behind Darrell’s Dream Playground at Warriors Path State Park.

After more than 28 years, however, the iconic wooden structure had reached the end of its expected life. The construction of the reimagined Castle Playground, designed primarily by Johnson students, is sponsored by the Andrew Johnson Parent Teacher Organization, a nonprofit group.

The vision is to rebuild a community funded, accessible, innovative playground for all the children of Kingsport. When the project started, it was decided that the original wooden play structure would be replaced with a similar style playground.

The entire student body visited the playground Dec. 19, followed by demolition that started the afternoon of Dec. 21.

WHAT ABOUT THE TIME CAPSULE?

Edwards said he is working to see that all the 1990 items than can be salvaged from the time capsule are put back in a new time capsule, along with items from 2019. Paper items in the capsule were frozen, and with the help of an archivist, the school is working with Eastman Chemical Co. to get access to a vacuum chamber to save water-logged paper items, possibly including a 1990 edition of the Kingpsport Times News.

The four at Johnson in 1990 when the playground was built spent the afternoon of Dec. 19 watching the three-hour search for the capsule: Carolyn Harris of second grade, Carolyn Slaughter and Patsy Stout of first grade and Ann Irvin of kindergarten.

WHAT IS THE PLAYGROUND BACKGROUND?

In November 1990, the original structure was built in five days of concerted effort by more than 1,000 volunteers from across Kingsport. Local businesses and organizations supplied building materials, tools, food/beverages and provided various supplies for the built-by-donation playground. The entire structure covered less than half an acre and had nine different levels.

The playground, praised in 1990 as a therapeutic tool for disabled children, was like no other in Northeast Tennessee. The majority of the structure was handicapped-accessible for the physically disabled. The joint effort between the Johnson Parent Teacher Association and the Civitan Community became a model for future playgrounds.

WHAT IS THE BUDGET BREAKDOWN?

So far, $191,000 in donations have been raised of the $275,000 needed for the playground. Edwards said the project will move forward with a mulch surface, but that extra money will go toward a poured surface, similar to the one at the Kingsport Carousel, that can be added later.

To raise additional funds, the “picket campaign” has been restarted, in which folks can buy a picket engraved with an individual’s name, family name, business or group. They cost $50 each, with about 150 sold of 950 in the plan.

“We have many, many left,” Edwards said. “We’ve had some people ask about the picket sales. We stopped it until we could find someone to make them for us.”

The Inventor Center downtown will engrave the pickets, he said, and they can honor living people or memorialize departed folks. For instance, he has bought one that will say: “The Edwards Family.”

WHO IS NEEDED TO HELP?

Volunteers are needed. More than 1,000 volunteers, skilled and non-skilled, from across the Kingsport area came out in 1990 to build the original castle playground, and organizers hope a similar number turn out this time. Volunteers can sign up on the website or go by the school.

“I think we are getting close to about 100,” Edwards said. “We just want to be sure everybody who wants to help with the playground is in.”