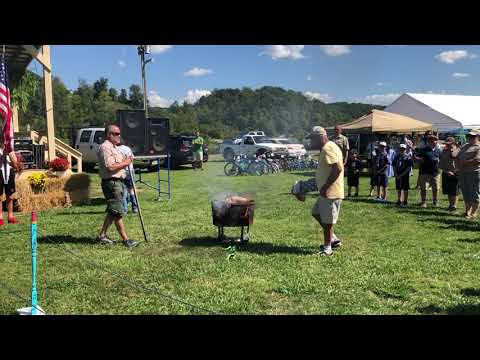 SURGOINSVILLE — From antique vehicles and tractors to electric vehicle, inflatables, arts and crafts, food, music and a dunking tank, the 2019 edition of the Surgoinsville Riverfront Festival  wrapped another year of memories Saturday night with a fireworks show.

The annual event, mostly held at Riverfront Park on the north side of the Holston River, started with a downtown parade Friday and continued Saturday morning with a horseshow tournament and then in earnest starting at noon Saturday with events in the park. It was held roughly a month earlier than in past year, but despite the heat crowds still turned out for food and a flag retirement by Pack 84 Cub Scouts and Troop 84 BSA, formerly Boy Scouts of America.

After the tattered flags were burned in a metal barrel, scouts hung medallions on veterans, including a son, fourth grade Weblo Cub Scout Brian Gilbert, who put a medallion on his father, veteran Perry Gilbert, and a scout who put one on Surgoinsville Mayor and Dairy Mart owner Merrell Graham. Churches gave away free food and drinks, while vendors sold food, drinks and other items. Other veterans honored were James Armstrong and his wife, Kristy, both Cub Scout volunteers.